“Black men loving black men is a revolutionary act,” writes the late and great Black gay writer Joseph Beam in his poignant essay, “Brother to Brother: Words from the Heart.” A personification of Beam’s insurgent statement can be found in the life and legacy of C. Glenn Carrington.

Calvin Glenn Carrington (1904-1975) was a Black gay leftist and collector of Black art; he was also a social worker, newspaper writer, and amateur photographer. Carrington received his BA from Howard University, where he studied under the leadership of Alain Locke, the “godfather” of the Harlem Renaissance. Carrington is associated with other figures of the New Negro Movement, Langston Hughes, Countee Cullen, and Harold Jackman to name a few. After traveling across Europe post-graduation, Carrington returned to the states and received his MA from Columbia University, and went on to become one of the first Black parole officers in New York State. Carrington clearly had a passion for social work, but it seemed that his true ambition was to give, receive, and capture the love of the Black gay men around him.

There are letters from the 1920s that document Carrington’s love and respect for his friends and lovers. The letters contain debates of Freudian theories of homosexuality and the seeking out and responding to advice concerning potential and ongoing sexual and romantic relationships with other men. The letters were full of love, laughter, banter, and knowledge. A friend of Carrington who was serving in the Second World War wrote to him in 1944, “There’s one piece of trade down here that keeps my heart aflame and my ass afire. Every time he passes my ass-hole twitches ‘Ain’t Gon Study War No More.” The language shared in this letter, particularly the word “trade”, is unique to Black queer culture. The intimacy that Carrington shared with his friends was not only physical and/or spatial but shared with camaraderie and language that provides a safe space for expression that offers a special form of closeness.

Carrington remained close friends with his college mentor Alain Locke. Locke was all about community and kept his community of Black gay and bisexual writers close to him. Langston Hughes, Countee Cullen, Claude McKay, Bruce Nugent were among Locke’s “fraternity of brothers” of The New Negro age. They all may not have liked each other or each other’s work (*cough* Hughes and Cullen *cough*), but they all respected Locke and valued the piety of community.

Carrington was also a friend of Locke’s partner, Maurice Victor Russell. According to Genny Beemyn, author of A Queer Capital: A History of Gay Life in Washington, Part 3, the young Russell was just beginning to acknowledge his “othered” sexuality and both Locke and Carrington offered support, comfort, and literature to aid Russell in his process. Beemyn writes, “The ties between Locke, Russell, and Carrington serve as another example of the close circle of gay and bisexual men which centered around Locke. (92)”

This sense of community and support is reflected in Carrington’s amateur photography of the 1950s. At a time where physique publications were targeting the budding gay community with magazines like Physique Pictorial, showcasing muscular, thin, masculine white men under the guise of “health and fitness”, Carrington was photographing the friendship, community, and intimacy of openly queer Black men. As Tracy D. Morgan elucidates, “His collection of well over two thousand photographic images includes shots of Black male couples seated on stoops – their hands resting casually on each other’s thighs – or standing on street corners, presumably in Harlem or Bedford Stuyvesant, where Carrington, at different stages of his life, made his home. Other images created by Carrington include Black men in small groups, their bodies resplendent, relaxed, and at rest amidst heathery fields (Morgan, Pages of Whiteness, 293).” 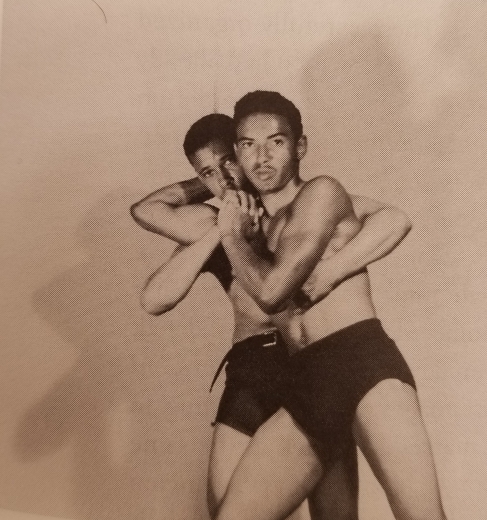 While underappreciated at the time and overlooked by history, what Carrington was doing was pretty revolutionary. The consist struggle, well one of them, for gay Black men is carving out our space to be fully realized in our identities when societal narratives attempt to define or erase, what Black male queerness looks likes, or what it can look like and represent. Carrington gave us a gift that defines, at least for himself, what Black male queerness looks like, and more so, what Black queer community looks like when given the opportunity to freely give and receive love and intimacy. It dispels dominate societal narratives rooted in heteronormativity, particularly, whiteness, and capitalism, and perpetuates a sincere sense of camaraderie, respect, community, and hope through the lens of subversive Black queerness.

Carrington died in 1975, leaving behind nearly 50 years of Black literature, including manuscripts, poetry, play scripts, printed programs and pamphlets in what is called The Glenn Carrington Papers. Included in the collections are personal documents of Carrington, correspondence between friends, mentors, and lovers, professional papers as his work as a social worker, Carrington’s photography, and more. The Glenn Carrington papers can be found at Schomburg Center for Research in Black Culture.